Traeger and Rec Tec are among the two most popular brands when it comes to outdoor cooking grills. They have never disappointed in providing high-quality grills, available in different sizes.

However, among their several models, I love the wood pellet grills from both these brands. Whether it's for a simple brunch in my backyard or a small feast with my family, Traeger and Rec Tec are my best friends. They never fail in providing me with the juiciest meals ever.

But choosing between Rec Tec vs Traeger and their several models can be confusing. Different models have different features. Thus it is often impossible to narrow down to a specific conclusion on the best to buy.

So to make your decision-making process simple and easy, I have picked the two most popular pellet grills from both these brands to make an accurate comparison.

For the comparison, it will be between Rec Tec RT-700 Pellet Grill and Traeger Ironwood 650. Most persons love both these pellet grills. And I firmly believe you will get your best-made foods from these two. But before going into the comparison of the grills here's a quick overview of both brands:

Contents show
Overview of Traeger
Overview of Rec Tec
Traeger vs Rec Tec Comparison
Build and Design
Temperature
Maintenance
Hopper Capacity
Additional Features
What are the main differences between Rec Tec vs Traeger?
Verdict
Camp Chef vs Traeger – Which is better to Buy?
Kamado Joe vs Big Green Egg – (Ultimate Comparison) Which is Better?
Traeger vs Yoder Grill Review – Which is the Best?

Whether its a beginner or someone well-experienced with grills, everyone who enjoys an outdoor cooking experience is familiar with Traeger. Since 1985 till today, Traeger is continuously manufacturing budget-friendly grills for all kinds of grillers.

Click Image to See More Photos and Price on Amazon

Though most of their grills are affordable and mid-priced, they have never compromised with quality. With every passing year, Traeger manages to cope up with the growing technology and incorporate it into their grills.

Along with improving the designs and build, Traeger also developed important features and incorporated modern technology. And the best part is, you get all these new developments within the same affordable price range.

One of their most remarkable grills is the Ironwood 650. In a nutshell, this grill represents Traeger at best. It still maintains the traditional quality build of Traeger but, with a touch of modern technology.

One of the most remarkable developments by Rec Tec was the introduction of Smart Grill Technology. With this, they succeeded in creating a pellet grill that worked as good as gas grills.

Along with modern technology, Rec Tec has designed their grills in such a way that they are durable as well as low maintenance. The cost of Rec Tec grills is usually more than Traeger grills, yet they are worth every dollar.

From this brand, I have picked their RT-700 Pellet Grill. This grill has exceptional features, plus most experienced grillers love this product. Also, this grill has a similar price range as Traeger. So, comparing this product with Traeger's Ironwood 650 would be fair.

Now, let us get into the comparison between the key features of Rec Tec RT-700 Pellet Grill and Traeger Ironwood 650.

Traeger uses a combination of materials on their grills. While it uses powder-steel for coating the grill body, the cooking grates have a porcelain coat. The handle on this grill is made of stainless steel. The materials are durable, yet there are certain aspects where Traeger can still improve when it comes to their grill build.

Click Image to See More Photos and Price on Amazon

On the other hand, Rec Tec is all about durability and sturdiness. Rec Tec uses only the best quality and heavy-duty steel in manufacturing their grills. The entire body, including the handle, is made of stainless steel. Thus, with Rec Tec grills, you won't have to worry about high maintenance. Rec Tec grills tend to last for several years, so you can be sure that you won't waste your money with one of their products.

So when it comes to overall build and design, it's evident that Rec Tec is a better option, and Traeger has room for more improvement.

With the Traeger Ironwood 650, it comes with their Pro D2 Controller technology for a consistent temperature output. It also includes the Turbo Temp system. This system ensures that the heating process will be quick and consistent. Also, the temperature control panel on Traeger is dial-based.

Traeger also incorporates the classic Advanced Grilling Logic Algorithm in their Ironwood 650. With this, it can maintain a temperature within +/- 15°F.

On the contrary, Rec Tec RT-700 features a PID style controller. This controller is more advanced than the one on Traeger's grill and can maintain temperatures between +/- 5°F. This accurate temp control system is one of the main standouts of the Rec Tec brand as it is often better than the temperature controller found on most other grills.

Along with this accuracy, the Rec Tec grill has a low heat-loss system because of its heavy-duty steel body.

Both Rec Tec RT-700 and Traeger Ironwood 650 are on par with each other when it comes to maintenance. Both the grills have some porcelain elements. While Traeger uses porcelain to coat their cooking grates, Rec Tec's grill has an enamel lining. Thus, cleaning their products becomes easier than cleaning stainless steel.

Also, the drip tray for both of these grills is detachable—this aids in easy cleaning. The design on both the grills is almost similar. So, there is not much difference when it comes to maintenance.

The hopper capacity is another crucial aspect to consider while picking the right pellet grill. The size of the hopper affects your level of convenience. The larger the hopper, the better, since nobody wants the hassle of constant refilling.

In this aspect, Rec Tec takes home the trophy with a hopper capacity of 40lb. You can cook for forty hours without having to refill on the Rec Tec RT-700 grill.

Unlike Rec Tec, Traeger Ironwood 650 only offers a capacity of 20lb. However, this capacity is quite enough, and it isn't a big issue.

Rec Tec has continuously incorporated technology into their grills ever since their first model. Traeger did start a little later on with the whole technology concept. But once Traeger developed and redesigned their models, it has not failed in delivering the latest high-tech features.

Both Rec Tec RT-700 and Traeger Ironwood 650 have inbuilt Wi-FI technology. This feature enables you to control and monitor the grill through your smartphone. Their Wi-Fi connection coverage is not that broad, which means you may have some lag issues on both the grills. But this problem can be seen more on the Rec Tec grill.

Traeger has developed a huge database and is also " Alexa " compatible. This feature is missing in Rec Tec RT-700.

However, there are two excellent additional features on the Rec Tec grill. The first is that it offers two temperature probes and has an inbuilt interior light. Of course, you can always use a lamp or torch while cooking at night on the Traeger grill. But the inbuilt light just adds to your convenience. 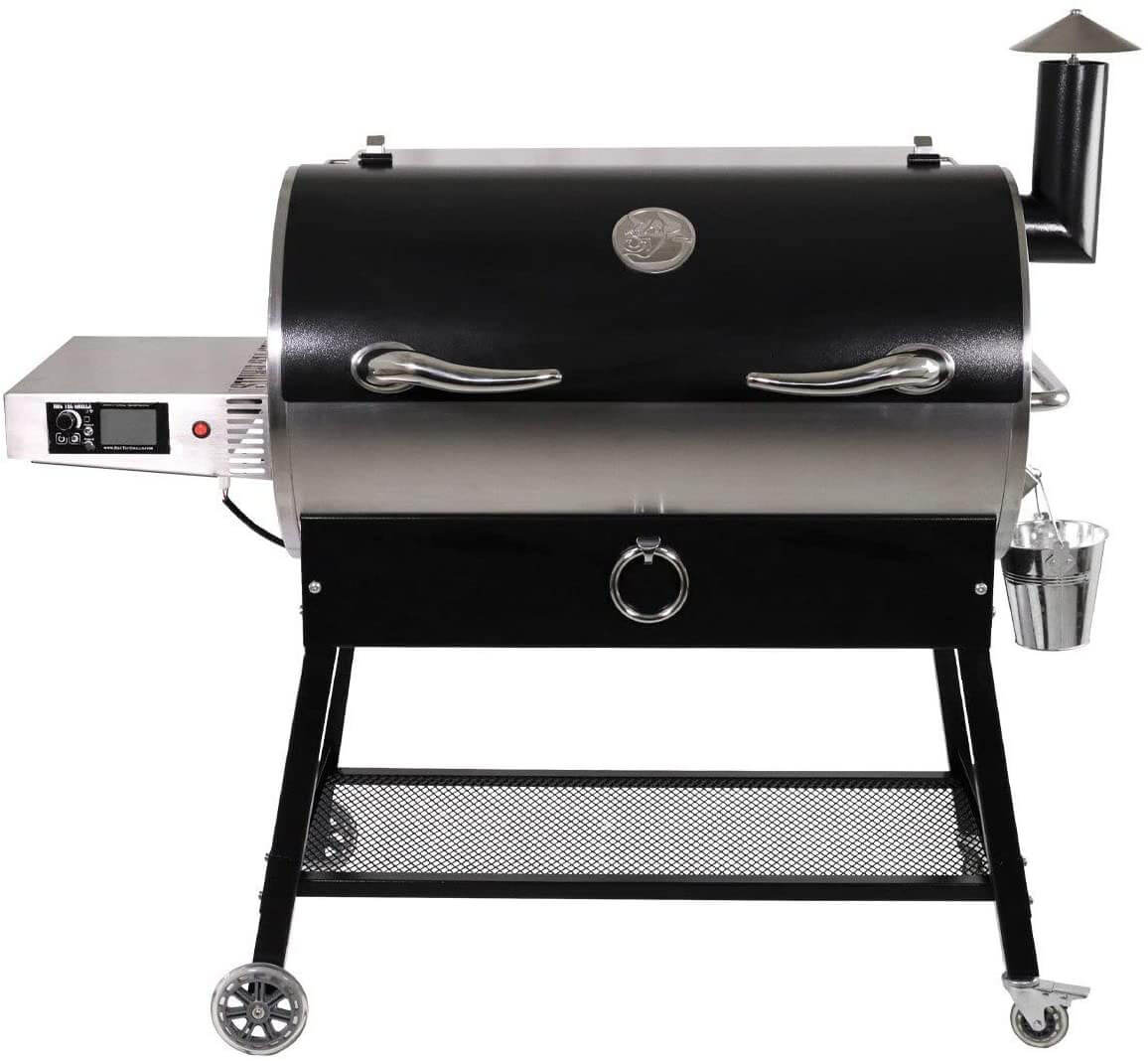 What are the main differences between Rec Tec vs Traeger?

Both Rec Tec and Traeger are quite similar regarding grilling performance. However, there is one significant difference we can note.While Traeger is more high-tech and includes several technologies, Rec Tec focuses more on functionality at least for the models we compared. Moreover, Traeger grills are generally more affordable. But when it comes to cooking space and heating systems, Rec Tec is more efficient.

If you want a grill with several technologies or if you have a budget limit, Traeger Ironwood 650 is a better option for you. On the other hand, if you want better cooking performances and do not mind spending a little extra, you can opt for the Rec Tec grill.

But with both the grills, you can expect excellent and juicy cooking results. Also, with a little maintenance, both grills can last you for years.

Camp Chef vs Traeger – Which is better to Buy?

Traeger vs Yoder Grill Review – Which is the Best?