So you like the taste of that juicy smoked meat, but lately, you've heard some concerning things regarding the consumption of smoked meat.

Look, I smoke meats almost every day, so I understand the feeling of wanting to have a tasty piece of meat. But would you instead prefer exposing your health to its harmful effects? Doubt it.

I'm sure you'd much rather find out how serious of a health impact it has on your body.

So set your worries aside because you have landed on the right article. In this article, we'll go over everything you need to know about the effects of eating smoked food. Before you read on, I just want to tell you that eating this type of meat isn't all bad. But there are some downsides involved that may be a concern for you or your family members.

What is smoked meat, and how do you prepare it?

Smoked meat comes from a method of meat preparation that usually involves the burning of wood, which generates smoke and heat to slow cooking any meat.

Smoking meats have always been commonplace for undeveloped countries since curing and smoking meat helps in preserving the meat through an antimicrobial effect. As such, eating smoked food isn't anything new, and preservation is one of the many benefits attained by smoking meat. Preparing meat with smoke has been a long-standing tradition in many countries and is one of the preferred ways to cook a variety of meats. Before grills and smokers became popular, they would set up a fire with river stones, wood, and a covering to smoke their meats.

These days, there are many types of equipment to smoke meats from charcoal smokers, gas smokers, electric smokers, and wood pellet smokers. However, there are two main ways to smoke meats that most people know of, the first is through exposing the meat to heat and smoke for an extended period or grilling it. The first method helps in preserving meat, and people have used this preserving method for thousands of years now. Grilling is the more common term that we use to refer to smoking meat.

So is smoked meat a healthy food choice?

Let's get into the central question; is eating smoked meat bad for you? The answer is yes, but it depends on how often you eat it. Regrettably, the regular consumption of smoked foods such as pork, beef, or any flesh, for that matter, will have adverse effects on your health.

Smoking meat through the burning of wood, charcoal, or gas exposes it to polycyclic aromatic hydrocarbons (PAHs). These PAHs have cancer-causing properties that raise the risks of getting cancer if consumed too often. In addition to this fact, the reaction of PAHs and nitrogen, which is very common, has even more carcinogenic properties.

Although most studies on the topic are not absolute, they have ample convincing results and outcomes. So, it is best to avoid the daily consumption of smoked foods if possible. The phrase "better safe than sorry" is very apt in this situation.

What are the harmful effects of eating smoked meat? 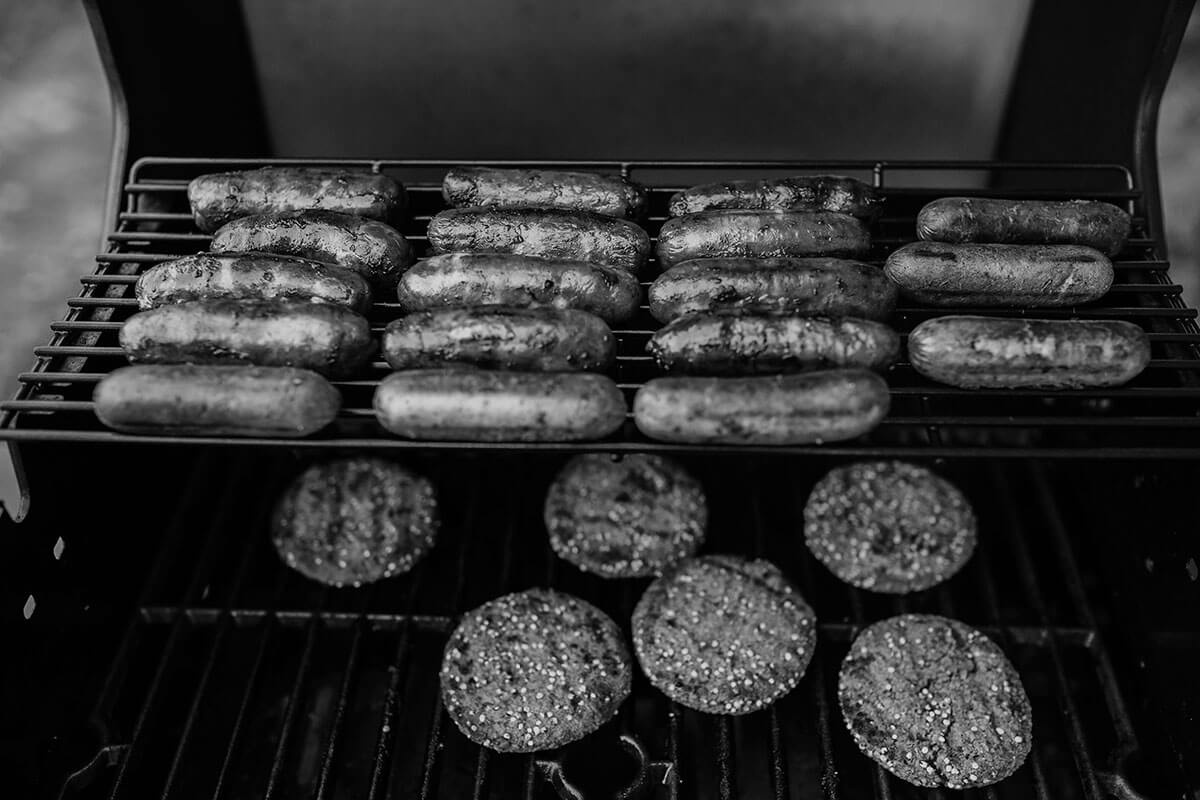 Now that we know regular consumption of smoked meat has harmful effects on our health and body. But what does it do to you? Let's take a look at the most common health concerns:

As mentioned earlier, scientists and researchers have done studies on eating smoked meats and their relation to cancer. These studies have said that overeating smoked food exposes a person to a higher risk of getting cancer.

PAH is an organic compound that causes carcinogenic properties. Scientists have proved this fact by observing it under animal model studies. Skin cancer, lung cancer, bladder cancer, liver cancer, and stomach cancer are the types of cancer that PAH exposure can cause.

Food gives up to 90% of the total PAH exposure in adults. PAHs get deposited on meat when you burn wood, gas, or charcoal to smoke it. Charred food has the highest concentration of PAH, followed closely by smoked and grilled food.

Rare exposure to PAHs will not cause cancer. It is the prolonged exposure to PAHs that changes things. So eating smoked meat once in a while will have little to no effect on raising the risks of getting cancer.

Many people smoke meat because this method enhances the flavor of the meat and also improves the shelf life. Although smoking has some valuable benefits, several studies have linked smoked meat to food-related illnesses.

The first problem is Botulism, and this is a toxin that a bacteria called Clostridium botulinum produces, which causes poisoning. This bacteria can survive and even thrive in smoked meat. Some common symptoms of Botulism are vomiting, difficulty in swallowing, blurred vision, and nausea.

Extreme cases of Botulism has lead to paralysis and even death. Noticing the early signs and seeking professional medical help is always the best option if you suspect Botulism from overeating smoked meat.

The next problem that eating smoked meat can cause is listeria infection. It is a foodborne illness caused by another type of bacteria called Listeria. The Listeria bacteria live in food that is not adequately processed. It lives in cold temperatures.

The symptoms of a listeria infection are fever, nausea, getting muscle aches, and diarrhea. Moreover, it is said that the symptoms and signs of this infection in pregnant women, children, and older people with weak immune systems become much more severe.

In the worst-case scenario, babies with listeria infection may have trouble breathing or even die in the womb. If it survives, it may contract a deadly disease very soon after birth. Thoroughly cooking food is the best way to prevent Listeria.

Excessive consumption of smoked meat is likely to raise your sodium levels. Although the body requires a specific amount of sodium to function properly, too much sodium has adverse effects and may lead to cardiovascular diseases, high blood pressure, and even overhydration.

The reason why smoked meat has high levels of sodium is that we use a large amount of salt(seasoning) and brine to treat it. We all know that salt is the primary source of sodium for our bodies. So, if you eat smoked meat daily, your sodium levels may shoot up.

The only way to reduce the sodium levels in your body is to cut down on salt consumption. As such, you might want to cut back on smoked meat if you start suffering from high sodium problems. Also, if you or anyone you know suffers from kidney or heart problems, eating smoked meat may worsen these problems.

Another downside to eating smoked meat is that it gives you a higher chance to suffer from strokes. Since smoking meat requires such a large amount of salt and seasonings, which is known to increase blood pressure, it also increases your risk of having a stroke. Moreover, smoked meat-eaters are more likely to suffer from heart disease and type 2 diabetes.

As such, it is always a healthier choice to choose unprocessed foods, vegetables, and fresh meat over processed meats.

Try not to overeat smoked meat if you have the option to choose fresh meat. You can always get close to the flavor and texture of smoked by adding seasonings and slightly cooking it.

But is smoked meat all bad?

Here are some benefits of eating smoked meat or smoked food in general:

Even after reading about the negative sides of smoked meat, you might still have trouble wrapping your head around saying no to it forever. And is home smoked meat healthy?

Don't worry; we have some good news for you!

Eating smoked meat isn't all bad. As long as you do not eat it too much, too often, you will be fine.

It is an excellent source of protein:

Smoked fish and meat have high levels of omega-3 fatty acids and iron. These nutrients help in the body's growth and act as one of the best sources of protein. Smoked food is flavorful and an excellent addition to a person's balanced diet.

Smoked meat is usually low in fat content because we do not have to add any oil while preparing it. Smoking also removes fat from meat by way of dripping. A reduction in fat content is a significant health benefit as eating excessive unhealthy fat consumption may lead to high cholesterol in the blood.

Exposing meat to smoke helps in preserving the meat for long periods. As a result, many people use smoking as a method to keep meat and other food items from decaying as it removes bacteria and other microorganisms from them.

Tasty and easy to eat

The best thing about smoked meat that keeps people coming back for more is the added flavor that it has. They are also easy to prepare and do not take a long time to get from the shelf to your plate.

When will eating smoked meat start to affect your health?

Now that you know what smoked meat could do to your health, you should also be aware of where the line to the negative side is. The first thing to keep in mind is that eating a small quantity during special occasions will not harm your health.

So since the problem will start when you keep eating only smoked meat or if you begin to eat it daily, then you can easily avoid the harmful side of eating it. Anything in excess is not good for anyone or anything. The same saying goes with eating smoked food. Keep your consumption at a minimum, and you will stay healthy.

A word of Caution:

Wrapping up - Is eating smoked meat good or bad?

There are many reasons why people like to eat smoked meat, from having extra flavor to being easy to prepare. Although the health risks linked to eating smoked meat is alarming, you do not have to worry about it if you eat it in small quantities.