Are you looking for the best smoked food ideas from around the world? Then you came to the right place!

Travelling the globe in search of great smoked food is a challenge and a half.

With these amazing recommendations from reputable writers, you can simplify your search and narrow down to the delicacies that you would like to try to make in your favorite offset smoker grill.

Best Smoked Food from Around the Globe

Here are some of the recommendations of the best-smoked meals and top smoked food from all around the world:

– by Mary Chong from the Calculated Traveller Magazine – 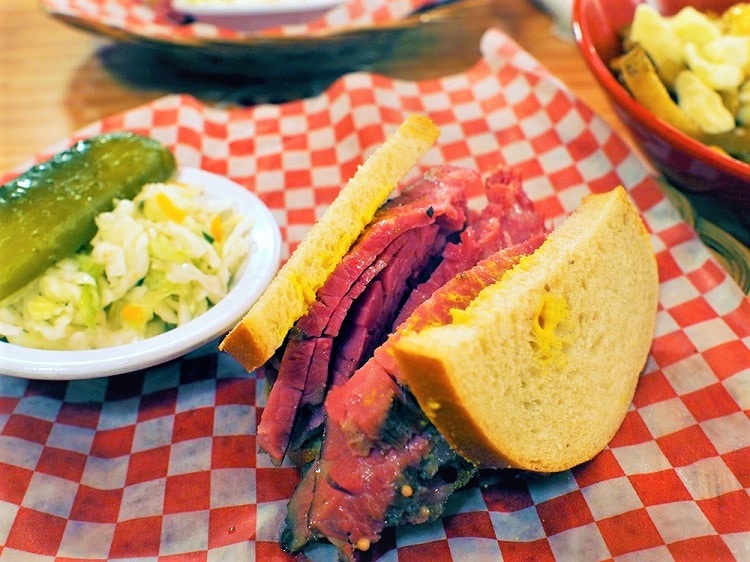 You can find Montreal-style smoked meat everywhere, but you have to go to Montreal, Quebec Canada to get the original deal.

A Montreal-style smoked meat sandwich is best when eaten steaming hot. The meat is hand-cut, slathered with yellow mustard and piled high on seedless light rye bread and served with a side of slaw and pickles.

Some people like the meat lean, but I prefer it a little fatty for extra flavor and juiciness.

For the ultimate Montreal, pig-out experience order your sandwich with a side of poutine – french fries covered in gravy and cheese curds – or skip the bread altogether and have the smoked meat piled directly on top of the poutine!

– by Julie from Julie Dawn Fox –

Flame-grilled chouriço from Portugal is one of few smoked meat products that I genuinely enjoy. Similar to the Spanish chorizo, this is a pork sausage, coloured and flavoured with paprika and a bit of garlic and salt. 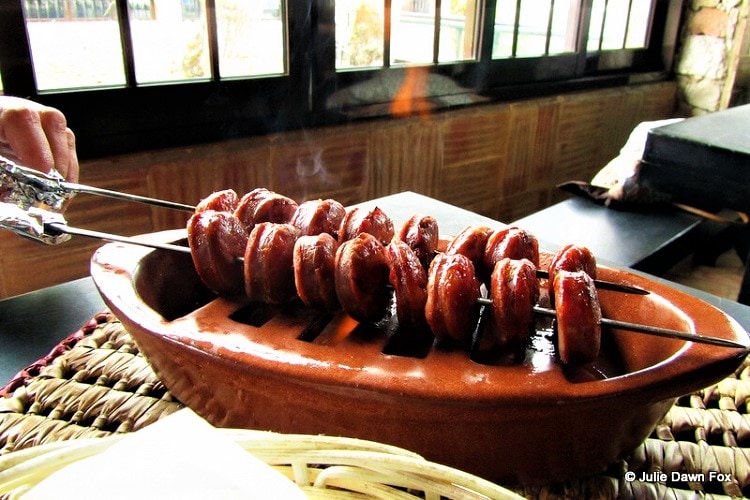 Back in the days when rural households kept and slaughtered their own pigs, they had to find ways to put every part of the animal to good use to see the family through the future months.

Traditionally, these red sausages would be dangling above the kitchen fireplace until well and truly smoked.

You can eat chouriço uncooked but I’m not that keen as I am a bit squeamish about fat. Cook it in front of me over a hot flame and I’m more than happy to tuck in.

It’s not just the change in flavour and texture that makes flame-grilled chouriço a special dish – the drama and excitement add to the experience.

The chouriço is typically sliced and placed on the rack of a special dish that has space for brandy or another flammable alcohol beneath.

Light the fuel and watch as the bluish flames lick and curl around the sausage, gradually cooking the fatty bits and crisping up the skin.

A beautifully carved delicacy that you are sure to find amidst stalls selling brooches and jewellery on Krupowki Street in Zakopane, Oscypek, a type of cheese from the mountainous Podhale region, is one of the best-smoked food in the world. 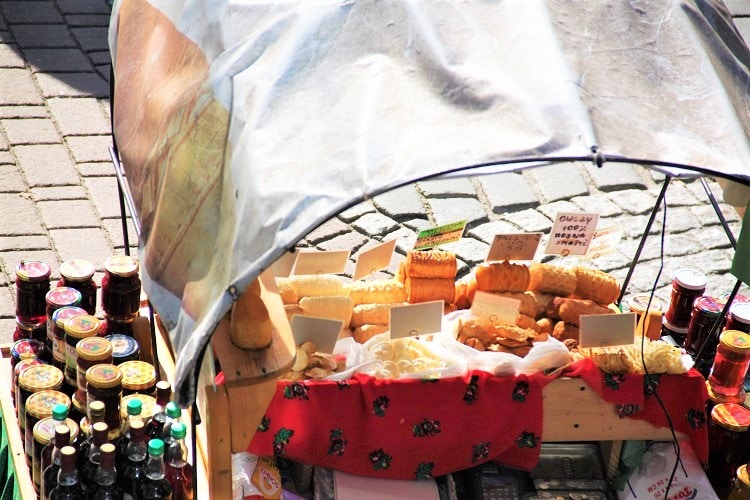 Made with at least 60% sheep milk and weighing 600 to 800g, this spindle-shaped cheese is a bit like mozzarella with a bit more character because of its sharp and briny taste.

Laced with the aroma of smoked pine and decorated by hand, it is delicious as it is beautiful.

As it is a traditional treat with particular criteria, make sure you find an authentic Oscypek while in Poland as it is quite common to find serki goralskie, a common highland cheese that did not meet the high standards.

– by Sarah from A Social Nomad –

The Omul fish is a small white fish endemic to Lake Baikal, Siberia, Russia. It’s from the salmon family and Lake Baikal is the deepest lake in Europe, although you will need to travel to the small town of Listyvanka on the edge of the lake to try smoked Omul. 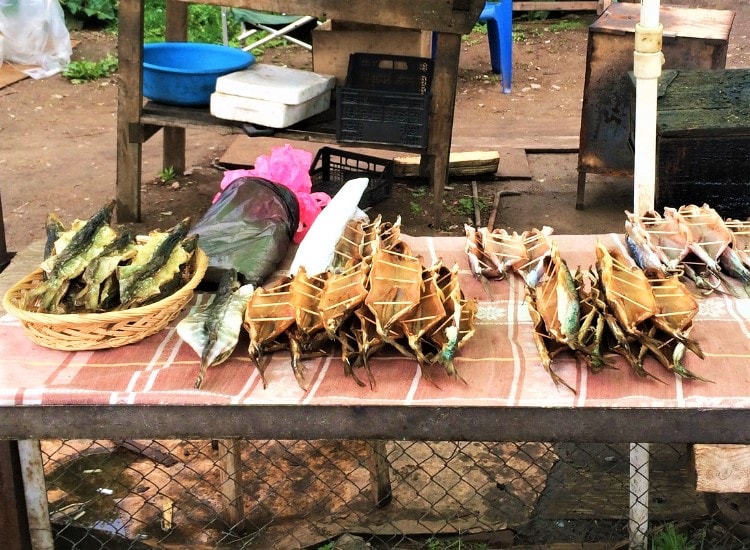 Most people do this while travelling on the Circum Baikal Railway.  Omul is considered a primary source of food for those living close to the lake, it is a delicacy in the rest of Europe.

The best way to find your smoked Omul is to walk along the edge of the town of Listyvanka. Many of the residents here smoke Omul in homemade smokes located at the end of their gardens.

This is street food Russian style. And it is delicious.  It’s perfect for snacking on – salty, smoky and a little sweet.

– by Erin from Sol Salute –

When you’re in Texas, you have to try the BBQ. And the best BBQ is smoked with aromatic mesquite or hickory, producing very tender and flavorful meat. 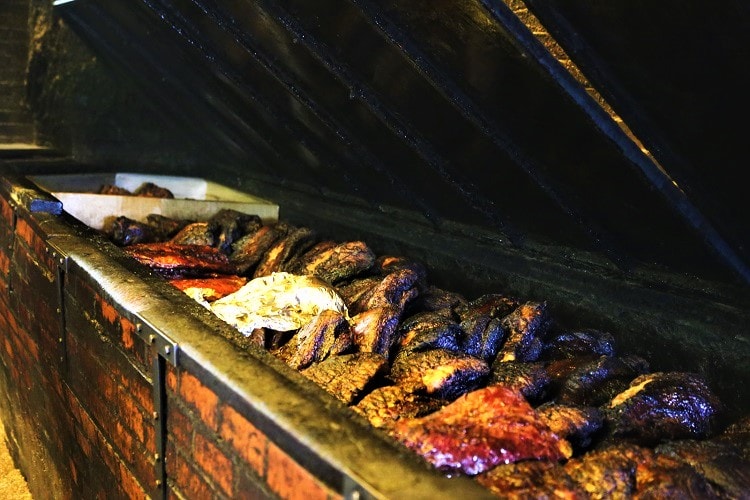 While people queue up for hours at popular BBQ spots in cities like Austin, the meat capital of Texas is in tiny Lockhart.

There are four excellent barbeque restaurants and it can be hard to pick the best BBQ in Lockhart, so I recommend coming hungry enough to sample them all!

My favorite dish was the shoulder clod at Smitty’s. Brisket is a Texas BBQ staple and you can order it fatty or lean. While fatty brisket tends to be the most popular, I fell in love with the lean cut/shoulder clod.

The hours of cook time had rendered it into butter, no knives required, and the smoked flavor was excellent. I highly recommend making the effort to spend a day trying traditional Texas BBQ in Lockhart! 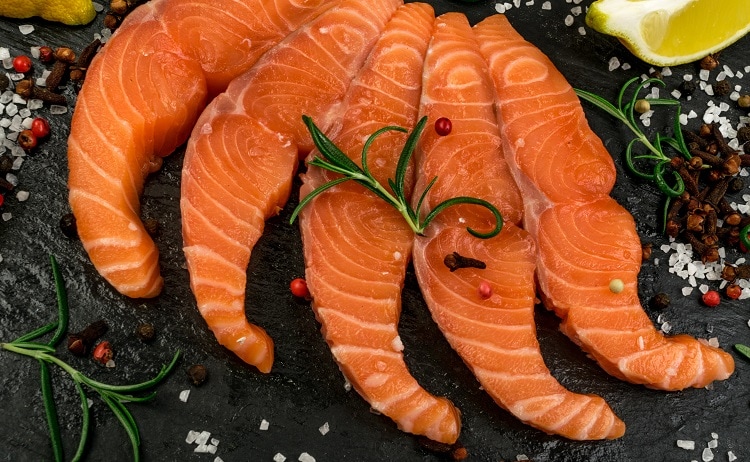 I prefer Alaskan salmon because it’s wild-caught, as opposed to Atlantic salmon which is typically farmed. I love it so much, that I always request it as a souvenir when my friends take their annual trip to Alaska.

The preparation includes curing the fish in a salty brine, then either cold- or hot-smoking it over local wood.

Cold smoking (my personal favorite) occurs at a temperature of about 99° between several hours to several days, and produces a moist, almost melt-in-your-mouth salmon – it’s the kind you usually see sliced thin on bagels with cream cheese.

Hot smoking occurs at temperatures up to 200° and produces a more jerky-like salmon. One – or both! – of these salmon, preparations should absolutely be on your list of foods to try if you ever visit Alaska.

The Dutch have been eating eels for hundreds of years. There used to be an abundance of eels in the Dutch waters but the last 50 years the eel population dropped by 95% and the eel is becoming an endangered species. 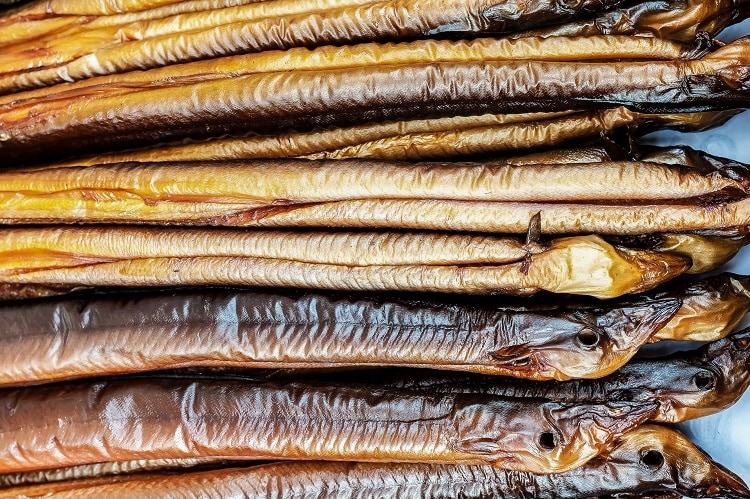 About 90% of the smoked eel for sale today is raised on eel farms. Researchers haven’t been able to breed eels in captivity, so the process starts with capturing wild eels, after which they are raised in captivity.

Traditionally smoking the eels was one way of preserving them and gave them a lovely smoked flavor. Not only is smoked eel delicious to eat, it’s also very healthy as it contains a lot of Omega-3 fats.

Smoked eel is eaten as a snack, often on toast or on a bun. One of the most famous (eel) fishing villages in The Netherlands is Volendam, where you can still see the traditional smokehouses.

However, nowadays you can buy smoked eel in all Dutch fish shops or at the fish stand of most Dutch markets. Because of limited availability, it’s become quite expensive.

– by Charmaine from Jamaica Travel Saver –

Jerked meat is one of the first foods that come to mind when you think of Jamaica. 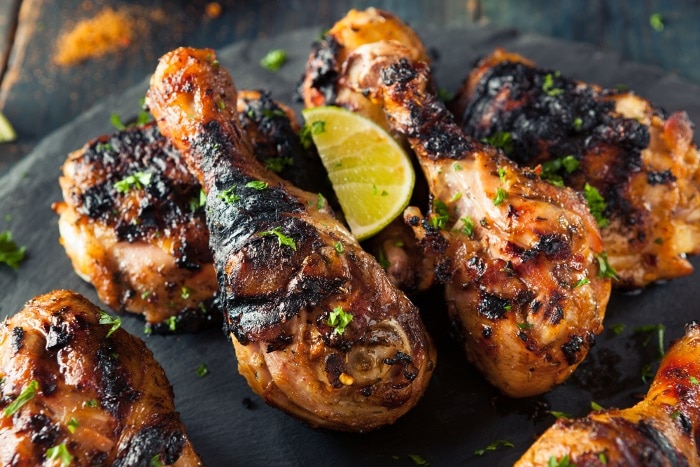 This spicy, peppery delight is one of my favourite foods and should definitely be on your list of foods to try in Jamaica.

The most common meats used are Chicken and Pork; however, other meats such as lamb, beef or fish can be used.

Jerk is a cooking method where meat is dry-rubbed or marinated with spices such as pimento, thyme, scallion, and scotch bonnet.  The meat is then smoked under pimento wood, which gives it a unique flavour.

It is said that Jerk first originated from the Maroons (escaped slaves), who in order to escape capture, preferred to smoke their meat in pits in the ground with pimento wood.

This cooking method allowed them to cook discreetly and it also preserved the juiciness of the meat.

If you want to purchase authentic jerk meat in Jamaica, the best place is the Boston Jerk Centre in the town of Port Antonio.

– by Theresa from The Local Tourist –

Chicagoans love their barbecue, and one of the best places to get some smoked meats is Honey 1 BBQ. Why? Because Pitmaster Robert Adams has an aquarium smoker. 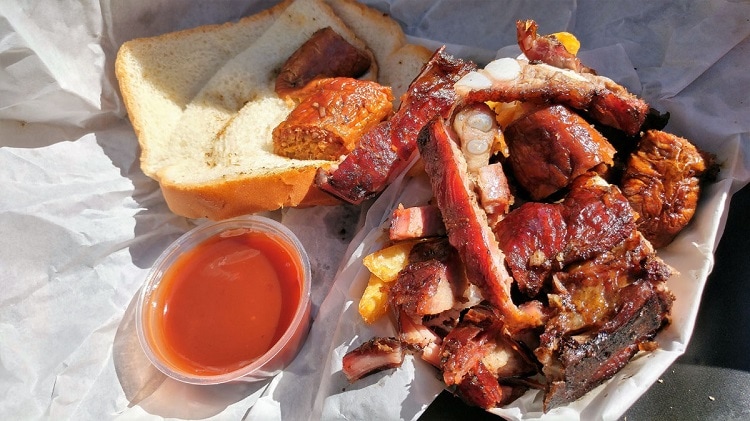 This rectangular contraption allows a pitmaster to build a wood-burning fire indoors and it directs the smoke out through a chimney flue, and as you approach the scent is instantly recognizable.

This smoker tempered glass windows so the pitmaster can see inside, making it look like an aquarium.

There are so few of these smokers because they require vigilance; the fire needs to be tended to make sure it doesn’t burn out or get too hot but provides the perfect amount of smoke.

The proof is in the rib tips. They’re tender and meaty, and when slathered with some piquant, slightly spicy sauce and a slice of white bread, they’ll satisfy any barbecue craving.

Smoked salmon is one of my absolute favourite foods. 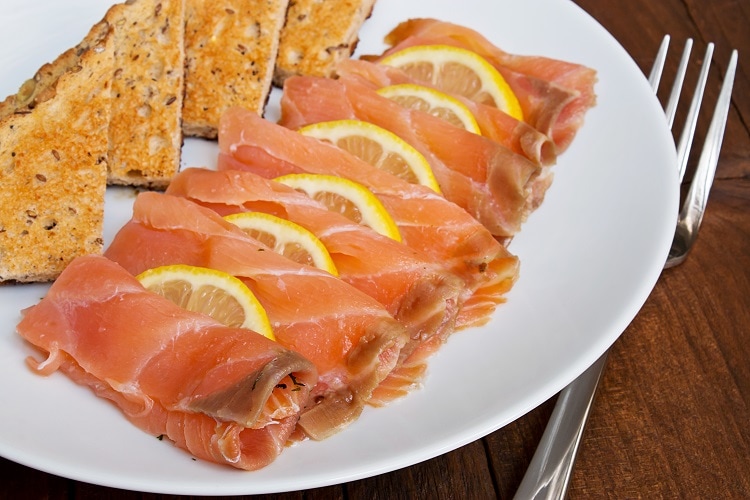 It can be found all around the world, and has been eaten throughout history – I’ve read that the Greeks and Romans loved it and that the first smoked salmon factory is understood to have been in Poland in the 7th Century!

While you can find smoked salmon in supermarkets and restaurants around the world, I recommend trying Scottish smoked salmon.

Scottish salmon became the first non-French food to win the Label Rouge designation and is known for its quality.

The Scottish fish are typically fed better quality feed than in other parts of the world and farming can be less intensive.

Smoked salmon is used in lots of different dishes, but in the UK it’s particularly popular as a starter dish on brown bread with a squeeze of lemon.

I love salmon because it’s a great source of omega 3 fatty acids – but mainly because it tastes great and can be used in so many different ways, from sandwiches to fine dining starters. Try it!

– by Amber from With Husband In Tow –

Mauritius is an island off the east coast of Africa, with a cuisine that is influenced by both African flavors and Asian spices. There are several local specialities where these flavors combine. 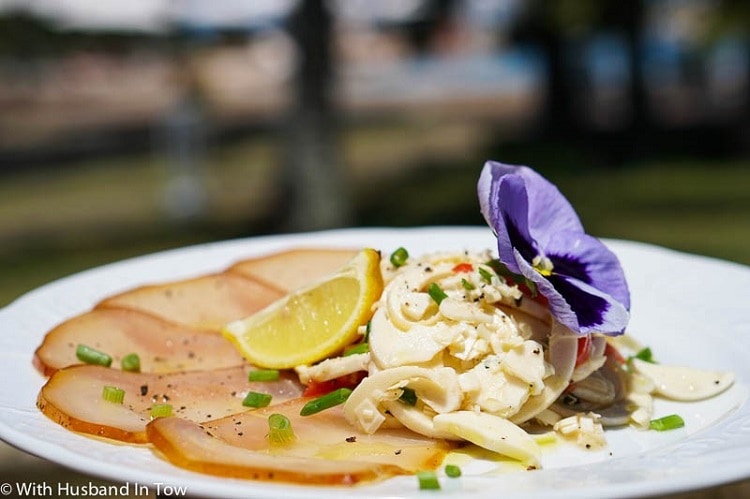 But, when it comes to traditional Mauritius food specialities, one dish stands out among the rest.

Smoked marlin is one of the most common dishes to eat in Mauritius, particularly for breakfast.

In the morning it is served thinly sliced with a spritz of citrus. As a starter during lunch or dinner, it is commonly found topped with another Mauritian speciality, hearts of palm.

I am not generally a huge fan of smoked fish, but the smoked marlin has a more mild flavor than smoked salmon, for example.

I tried it several times, but could certainly not eat it like the Mauritians do – in large quantities multiple times a day. A unique smoked food experience for sure.

Any cookies that may not be particularly necessary for the website to function and is used specifically to collect user personal data via analytics, ads, other embedded contents are termed as non-necessary cookies. It is mandatory to procure user consent prior to running these cookies on your website.