Want to be a pro or at least sound like a barbecue pro? Then get your barbecue slang on and learn all the most common meat cooking terms asap!

Ok, so you know how to smoke and cook meat on your barbecue. You have mastered the art of creating juicy, tender and succulent meat. However… 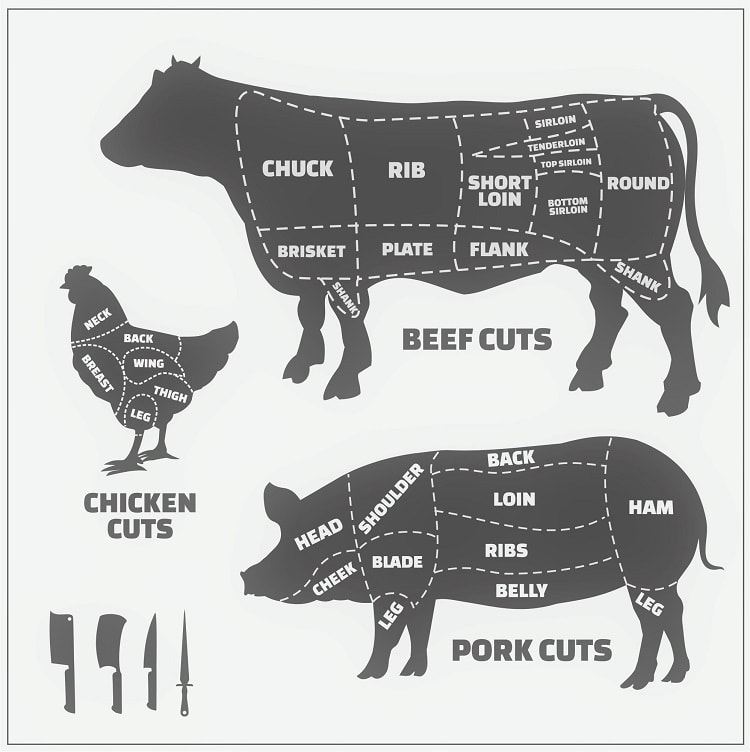 Are you ready to join the ranks of the “Pit Masters” and be able to talk the talk? Can you distinguish between “Bark” and the “Boston Butt”, “CAB” and the “Fat Cap”, or “Glue” the “Mop”?

Today, I will take you through the most common BBQ slang in our complete list of barbecue vocabulary:

This is a technique of cooking on a BBQ using different cooking zones allowing you for more control over the temperature.

This is a 3-step method of cooking ribs. The first step is cooking ribs on low heat (approx 225degrees) for 3 hours, followed by 2 hours wrapped in foil (with liquid in the smoker), followed by a 1-hour unwrapped cooking session at a higher temperature (approx 300degrees).

This is an original chilli con carne seasoning, which is a mix of chilli and other herbs and spices, such as garlic, paprika, black pepper and oregano.

A South-American word for a barbecue.

Also known as the back ribs or loin ribs, the baby back ribs are the sections taken from the top of the rib cage between the spine and the spare ribs. Baby back ribs are more curved and meatier in comparison to other ribs.

This is a common cooking term for an extra chewy, jerky-style crust that forms on the brisket that is being smoked. Damn good stuff!

Barrel smoker is usually made from two sections of sealed, but connected tubes, one with cooking grates for meat, and the other for the fire.

Also known as the Beer Butt Chicken, this method works by inserting the can into the chicken’s cavity and allowing the beer steam to cook the chicken whilst adding flavour to the meat.

Also knows as a “Bounce Test” this is a method of testing the doneness of smoked ribs. Simply pick up the ribs by the centre bone, gently bounce the rack up and down, and if the meat starts to break away, you are good to go.

Common barbecue slang for a pulled pork. Boston Butt is the upper-cut of the front leg of the pig.

It is a liquid mixture of seasoning that the meat is marinated before going into the smoker.

This is a 2-part cut of beef from the lower chest (breast), one is the deckle (the fattier and thicker part) and the other is point end (flat part and less fatty).

Also called “Char-Broiling”, this is a meat cooking method when the naked flame is a direct source of heat.

These are the delicious crusty, chewy edges of the point of the

Also known as the “Kentucky Barbecue”, this BBQ term refers to a chewy, crispy dived pieces of smoked pork or mutton, served with a BBQ dipping sauce.

These are, of course, beef ribs cut from the upper front of the rack for the cow. These are usually ribs: 2 through to rib 5.

This is the super crispy and crunchy skin of the pig. Best made by slow roasting on a BBQ or deep-frying in lard.

Also called a “Black and White” rub, which refers to salt and black pepper only.

It is a cooking method where the meat is placed directly over the top of the flames or their heat source.

It is a cast-iron pot with a lid.

It is a common Memphis-style seasoning for ribs, consisting of a BBQ sauce (that has been smoked to thicken), topped with a coating of seasoning.

This is a Memphis-style method for smoked pork ribs, which are smoked first with light seasoning, followed with a good about of seasoning coating after.

It is a thick, white layer of fat on top of the meat. Great at the quarter of the thickness for added flavour and to keep the meat tender.

It is a barbecue term used for a binder that holds the seasoning to the meat. Commonly a mixture of yellow mustard and a pickle juice, the flavor of which disappears after cooking the meat.

Method of cooking, where the meat is placed directly over the flame.

This refers to the connective tissue holding the muscle to the bone.

This is a method of smoking meat with a temperature of 130 degrees or higher.

This is a technique, where the marinate is injected into the meat with a syringe.

This is a method of cooking meat on very low heat over many hours.

This BBQ slang refers to the fatty, crispy bark pieces of a smoked brisket.

Refers to anything that is used to baste or brush meat as it cooks, in order to add flavor or to keep it moist.

A dark and crunchy outer layer of a smoked pig.

Pale and moist pieces of a smoked pig.

Refers to the BBQ meat that is served without sauce or seasoning.

This refers to a type of smoker that is made up of two sealed and connected tubes, or boxes, one with the firebox and the other with the cooking grates for the smoke to flow through. Check out the best horizontal smoker here!

This is a type of BBQ that burns compressed sawdust to grill and to smoke meat.

Pig on a Stick

A common term for a traditional BBQ that made in a whole in the ground.

Also known as the “Pitboss” is a BBQ slang for a head barbecuing chef.

Refers to a slab of ribs, also known as the BBQ grate.

Wood that holds less moisture and it burns more efficiently. You can check out some of the best smoking wood here.

A method of cooking food where the smoke is the source of heat and flavour.

A combination of pork ribs, brisket and sausages. 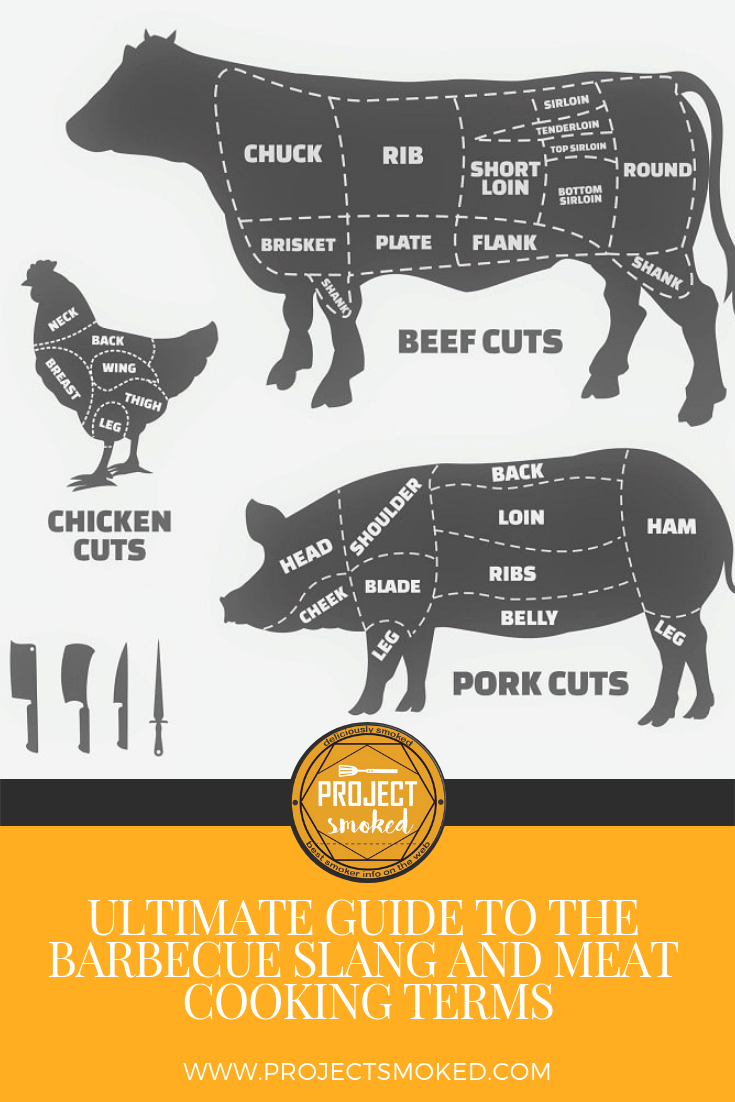